We are extremely fortunate to have several sporting stars who have represented their country at their sports, who have kindly responded to our pupil questions:

Please click on the image to hear their responses. 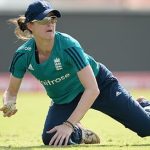 Lydia has recently retired, after enjoying an outstanding cricket career which spanned 13 years and included 225 appearances for England. After making her debut in 2003 against Australia, Lydia remained a permanent feature in the England Team. Rated as one of the best fielders in the world, she is one of the most capped players and played an integral part in winning both the One Day and T20 ICC World Cups in 2009. Lydia is also a five times Ashes winner, and was at the crease at the moment of the first Ashes win in 42 years! The team were rewarded with the famous open top bus tour of London alongside the men’s team who had also beaten Australia.

These international performances saw her named as England’s Player of the Year, as well as being shortlisted for the ICC World Player of the Year for the second year running. Sport has opened up limitless possibilities for Lydia and she has had the privilege of being able to travel the world and to play cricket in some of the most iconic places. Her highlights have been meeting the Queen and the Dalai Lama!

Lydia now commentates for both Sky and the BBC, and recently founded ‘Cricket for Girls’, which is a coaching initiative designed to inspire and develop female cricketers of all ages and abilities. We were extremely fortunate to have had Lydia involved in the coaching of our Girls’ cricket last summer and to speak at our Speech Day last July. 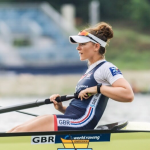 I am a current member of the GB Rowing Women’s Team. I have been in the team for 4 years and Tokyo was going to be my first Olympics. I have most recently competed in the pair event where I qualified the boat for the Olympics with Annie Withers and I have also been to three senior World Championships and medalled at two U23 World Championships. I haven’t had the smoothest of journeys with a few big injuries and some time out of the team so dealing with setbacks is something I’ve developed and hopefully can pass on to other people. 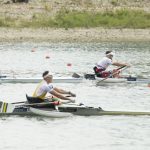 I was a high level domestic cyclist who in 2016 had an accident which has left me paralysed from the rib cage down. After going through rehab I joined the British Rowing Paralympic Development squad in 2017 and debuted internationally last year 2019.

Since racing internationally I have picked up a world cup bronze and a 4th place finish at the World Championships where I also secured Team GB’s place at the Paralympic Games.

I am currently training through the lock down and look to secure my individual place at the games next year! 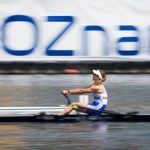 I am currently a developing rower on the GB rowing team. I started my rowing career at Oxford University where I was part of the 2016 winning Oxford women’s crew in the annual Oxford Cambridge Boat Race. In 2018 I made my first international debut for GB at the U23 World Rowing Championships in Poland and finished 5th in the women’s single category.

2019 was my first senior appearance in the women’s double sculls, racing at two world cups and the Olympic Qualifying Regatta in Linz where, sadly, my boat did not qualify; sporting success in never a linear pathway! This season so far I have been training at Leander Club in Henley-on-Thames with the aim of competing for GB in the 2024 Olympic cycle.

Here are a couple of photos attached which show training in the double for the 2019 Olympic qualifications, the final 100m of the U23 world championship final in Poznan, and an amazing trip I got to experience through rowing in September 2019 when a crew travelled to Zambia to row amongst hippos and elephants in order to raise awareness of the Save the Zambezi foundation campaign. 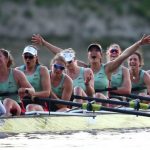 We both learnt to row when we went to Cambridge University, having had very different experiences with sport through school. Holly always loved sport, and tried everything that was an option, whereas Melissa used to try to avoid PE lessons. Holly applied for the GB Talent Identification Pathway, and learnt to row through that. In our second year, we both trialled for the Boat Race and rowed together in two races, losing one and winning one. During that time we also trialled for the GB Under-23 team, winning bronze and silver medals at the Under-23 World Championships, before transitioning into the Senior Team. In 2017 we rowed a pair together, coming 4th in the world at the Senior World Championships, before rowing in separate crews over the last couple of years, both qualifying our boats for the Tokyo Olympics last summer. We’re currently in lockdown together, living in a shed in Holly’s parent’s garden!