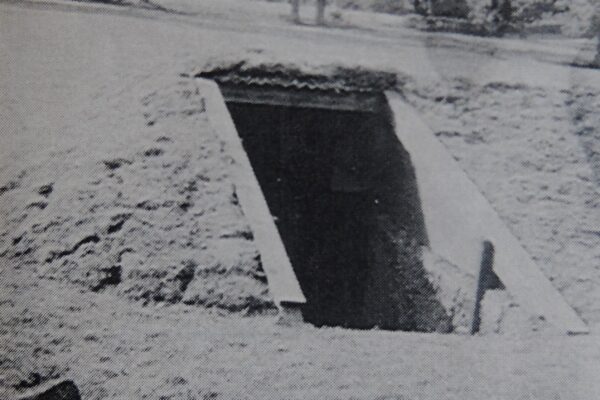 In the week that Poland’s largest WW2 bomb exploded during an attempt to diffuse it, our School Archivist looks back at the bombs that fell at Lambrook.

At the start of the Second World War in 1939, air raid precautions were put into effect at once. The experts insisted on a ‘daytime’ shelter at Lambrook, so a zigzag trench was dug in the top field, lined with sandbags and covered with earth and turf. Fortunately, it was never used and eventually became a giant sand heap. The school was not so successful, though, in escaping the dangers of night-time attacks.

On 31st December 1940 the Headmaster of Lambrook wrote a letter to all parents, which he began as follows:

To avoid anxiety caused by possible misleading information, I am writing to tell you that an H.E. bomb fell last night at 8.50 p.m. in the field next door, 800 yards from the school, and an oil bomb in the orchard at Orchard House.

Having then provided a few further pieces of information and some words of reassurance, the Headmaster ended his letter with these words:

You will doubtless get fuller and more descriptive details from your son’s next letter.

Yours sincerely, A. H. Forbes

Based on the reminiscences from some of those very pupils who were boarding at Lambrook that night, here is an account of the momentous events which took place. 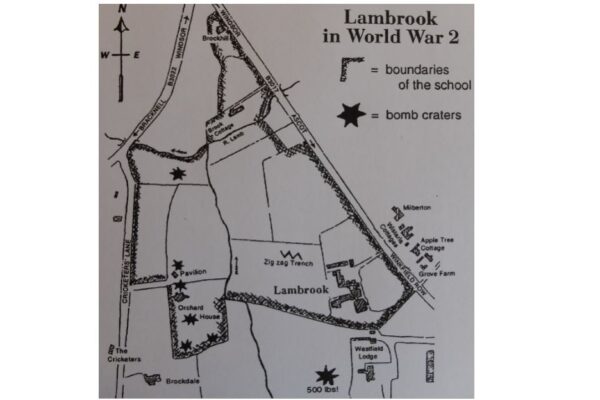 Enemy aircraft on bombing raids to Slough or London were frequently chased away by fighter planes, being forced to abort their mission and abandon the original targets. If they then came under anti-aircraft fire, the crew would jettison their bombs randomly over open country to increase their speed as they flew back to Germany – a particularly bad night saw 200 bombs fall between Bracknell and Ascot.

Anti-aircraft guns were positioned fairly near to Winkfield Row and loud bangs from them were often heard at Lambrook. That night many of the boys were once more awoken by gunfire and instructed to go down from their dormitories to the basement for safety, but, before anyone could respond, an ever-loudening whistling shriek heralded the imminent arrival of a bomb.

Warnings to ‘keep down’ were issued, the pupils instinctively buried their heads under the bedclothes, and what followed was an enormous explosion, followed by the sound of breaking glass. One boy later wondered if perhaps the bomb-aimer had spotted a large unidentified building, and thought it looked like a promising target, little realising it was a school.

Whatever the reason for Lambrook being bombed actually was, total silence reigned for the first few seconds after the explosion before the pupils were told to carry on going downstairs. Safely in the basement, they were joined there by the small number of boarders from Orchard House, who had been hastily gathered together and calmly marched up to the main school building.

The reason for their evacuation was that, in addition to the single high explosive (HE) bomb that landed fairly near to Lambrook House, a separate stick of incendiary bombs had been dropped neatly across the grounds by Orchard House. Together they straddled the building, breaking almost all of the windows, just as those on the south and west sides of Lambrook House had also been blown in.

The first bomb in this smaller string fell in the playing field behind the cricket nets, the next just outside the Cricket Pavilion, another in the drive (half on the grass and half on the gravel), and the last one in what had been a Rose Garden by the former Orchard House tennis court. The impact of this larger oil bomb caused the two ends of the yew hedge enclosing the garden to stick straight up in the air on either side of the crater.

With the boys ushered to relative safety, hot drinks, and much chatter, Mr Crawshaw (one of the Masters) was kept busy putting out the fires caused by the incendiary bombs – making good use of some sand, a spade, and earth scraped up with his hands. The plan below was drawn afterwards by one of the Orchard House boarders and shows where some of the craters were located. 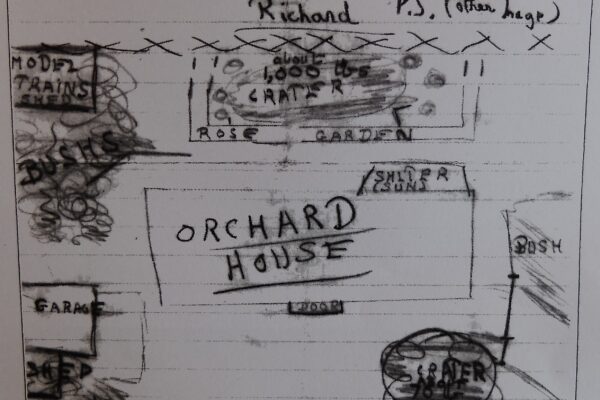 Two hours after the initial blasts, the ‘all clear’ signal was sounded, and the following morning saw an inspection of damage before the ‘normal’ lesson routine resumed. Excited pupils found souvenirs of shrapnel, and one boy managed to retrieve the tail fin of an incendiary, which was lying in a flower bed. The largest bomb had landed near Westfield, and was judged to have weighed about 500 lbs.

With the buildings having been shaken so badly that potential structural damage was feared, the school soon decided to close early for the Christmas holidays. Parents were contacted again in order to make arrangements for going back home, but all the journeys had to be by train as there was no petrol available for cars. When the boys returned to Lambrook next term they found that all of the windows had been repaired!

One Past Pupil later wrote of his experiences on that long October night:

It is often tempting to ask the question ‘What if?’ after a near accident. If we assume that the aircraft’s speed was 200mph, it would have been covering just under 100 yards every second. Thus, if the bomb aimer had pressed the release button 2 seconds earlier, he might well have scored a direct hit on the school. Thankfully he did not and as a consequence we all survived to tell the tale.

A Day in the Life of Saturday School