This week marks the 80th Anniversary of the Declaration of War. John Kimbell, our School Archivist gives an insight into how this was recorded at Lambrook.

Excerpt from the Lambrook Chronicle, December 1938

“Our chief feeling this year is one of intense thankfulness that we are able to write these notes under the same conditions as in previous years. We came back in September under the shadow of impending war.

Gas masks and trench-digging brought home to us to some small extent what the reality would be like, and the disorganization which an outbreak of hostilities would have entailed even in our own small community doesn’t bear thinking about.

And so it was an intense relief to us, as to the rest of the world, when the nations of Europe, having looked over the brink of the pit, shrank back.

We must hope that the trench, which now adorns the top field, will be of use for no other purpose than to serve as a memento of a terribly anxious time in the history of our country.

It is devoutly to be hoped that such a time will not recur, and that casualty lists like those of 1914-1918 will never again have to become a feature of the Chronicle. The day of National Thanksgiving for the averting of war was observed on October 2nd.”

Excerpt from the wartime reminiscences of Donald Phillips (Lambrook, 1936-40)

“I well remember hearing the Prime Minister (Chamberlain) announcing the declaration of war on the ‘wireless’ and the frisson of excitement it caused. What would happen now?”

Excerpt from the Lambrook Legacy

“The declaration of war on that sunny Sunday 3rd September 1939 ended the stop-go hopes of preceding months. Now there was work to be done and plans to be made for coping with blackout, air raids, dwindling staff and rationing. Fresh uncertainties loomed up continually.

Lambrook’s proximity to London, hitherto an asset, now made the school’s future doubtful. Winkfield Row was thought to be on the flight path of aircraft en route to bomb London. Should Lambrook move to safer quarters elsewhere? This was easily answered: big money would be needed for a move and there was none.

The experts had insisted on a daytime shelter so a zigzag trench had been dug in the top field, lined with sandbags and covered with earth and turf. It was never used and eventually became a giant sand heap. However, no one dared disregard the experts.” 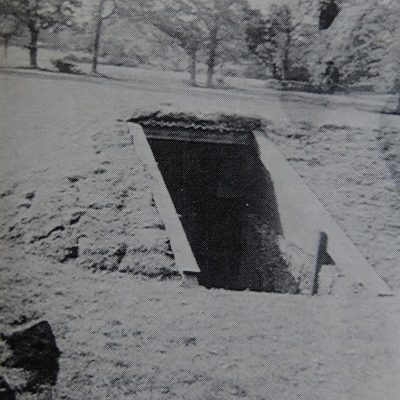 Excerpt from the Lambrook Chronicle, December 1939

“Let us, in the first place, put it on record that Lambrook still stands where it did. The fortunate fact that we are situated in a “reception” area and in a district far enough removed from danger-spots as to relieve us of overmuch anxiety from the alarms of war has enabled us to carry on as usual.

We have left the Chronicle in its usual form. In its pages will be found the record of a normal school year, and we hope that even to those who are now engaged in the sternest of all tasks, it may still prove of some interest and help to bring back memories of happier times.

And so it is now Good-bye. In a changing world Lambrook is changing too. What is not changing is the greeting which the Chronicle takes with it – a greeting which, this year more than ever before, springs from the depths of the heart.

To one and all it carries our sincere good wishes for a happy Christmas and good fortune in the coming year.”