Last Sunday saw the long-awaited unveiling of a new D-Day Memorial overlooking Gold Beach at Ver-sur-Mer in France. It pays homage to the 22,442 soldiers under British command who died on 6 June 1944 and during the ensuing Battle of Normandy, prior to the liberation of Europe towards the end of the Second World War. 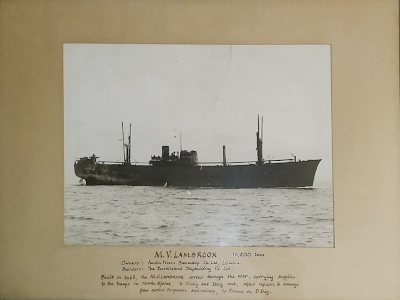 As a personal commemoration of these historic events, Lambrook can too, join in this occasion as it recalls its eponymous ship, which carried supplies across the Channel for the troops who landed in France as part of the allied invasion on 6 June 1944.

The M.V. Lambrook, a steel Motor Vessel of 10,200 tons, was built in 1942 by the Burntisland  Shipbuilding Company on the Firth of Forth, Scotland, and named by Mr J. Gibson Graham, a Director, whose son Johnny Graham attended Lambrook at the time.

Registered in London and first owned by the Austin Friars Steamship Co. / Galbraith, Pembroke & Co., the ship was fully ready by the early autumn of 1942 to carry cargo across the high seas, and was immediately earmarked for Government Service.

She was deployed for the offensive into North Africa, and went out with one of the first convoys carrying tanks and ammunition in support of the landing troops. For the greater part of the first half of 1943, the vessel continually plied between the United Kingdom and North Africa with these supplies.

When the invasion of Sicily took place later that year, the M.V. Lambrook was scheduled to take part in that operation and was again in the vanguard, not only with supplies but with considerable numbers of troops.

Despite many near misses from aerial torpedoes and other hostile action, she remained unscathed and continued the good work, being one of the first vessels to arrive off the Salerno Beachhead in September 1943.

On this occasion, a landing craft which was alongside her was blown up and it was as a result of Captain McInnes’ bravery that he was awarded the O.B.E. The citation read: ‘Captain H. F. McInnes. For good services in M.V. Lambrook, when the ship was attacked by the enemy on a number of occasions.’

The vessel was subsequently detailed to carry cargo for General Montgomery’s forces, which were at that time advancing along the east coast of Italy, but was unfortunate enough to run into an enemy mine which did considerable damage.

Nevertheless, she was quickly repaired and returned to Britain for a complete overhaul in time to head for the Normandy beaches on D-Day as part of Operation Overlord, continuing to transport supplies to northern France for a further six months during the ensuing Battle of Normandy.

Several Old Lambrookians, including Vice-Admiral P. W. B. Brooking, C.B., D.S.O., came into contact with the M.V. Lambrook during the war and Lieutenant-Commander D. R. G. Goldsmith’s destroyer escorted her in convoy on a number of occasions.

From the day of the M.V. Lambrook ‘s launch, the school was proud to share its name with its adopted ship. Gifts were despatched to the Captain, officers and crew, including knitted garments kindly made up by the Winkfield Section of the Women’s British Legion, and supplies of literature such as books or newspapers were forwarded from Old Lambrookians and other friends of the School.

Interesting letters, as well as souvenirs, passed regularly to and fro between the crew and the school. The ship’s carpenter begged his 10 year old pupil correspondent, Peter Bourne, never to forget that a pound note and his mother are a boy’s best friends, and also recommended that he pay particular attention to learning French in class: “I’d be doing much better with the girls here if I had”.

Having survived the hostilities, and in as good a condition as ever, the vessel carried out more peaceful duties in the service of commercial trade, but this in no way lessened the school’s interest in her activities. The community greatly valued maintaining two-way correspondence and sharing news.

The Editor of the Lambrook Chronicle in 1949 reported “We are glad to record that the M.V. Lambrook is safe again after being adrift for six days, as seen from the following announcement in The Times in October:

ADRIFT SIX DAYS, ADELAIDE, Sunday. – The British cargo vessel Lambrook, adrift since last Monday with engines out of action, was taken in tow by an Australian tug last night and is expected to reach Port Adelaide on Wednesday.”

Two years later, in 1951, when Galbraith, Pembroke & Company withdrew from ship owning to become ship brokers instead, the M.V. Lambrook was sold to the South American Saint Line, re-registered in Newport, and re-named the St Merriel. 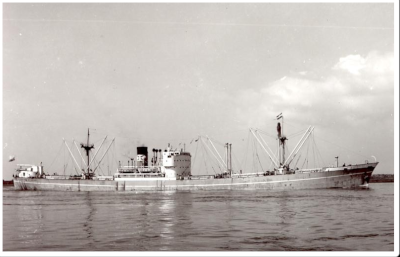 In 1963 the vessel was bought by the Agelef Companía Naviera in Panama, where she was re-registered as the Proodos, only to be sold on in 1965 to a different Panamanian firm, the Elpida Companía Naviera, and to acquire yet another new name – this time, the Elpis.

Tragedy finally struck the following year on 26 June 1966 when she was abandoned ablaze at sea following a diesel engine room fire. The ship had been en route from India (Mormugao) to Japan, carrying a cargo of iron ore, and was eventually towed to Sveti Kajo (Split, Croatia) on 10 January 1968 for breaking up by Brodospas.

Do take time to consider not only the historic role that the M.V. Lambrook, our very own adopted ship, played on 6 June 1944 but also her wider service record during the Second World War. In particular, please make sure that you pay your respects by viewing her framed portrait, which hangs on a wall in the School Office.