Our two sporting prefects, Sylvester and Beatrix, posed some questions to Rugby player, sportsman and Old Lambrookian Christopher Trapman, who left Lambrook in 1960.

After a career working for the World Bank as an Agricultural Economist, Christopher Trapman is now resident of Honduras, Central America. Trapman has played Rugby alI over the world with his last game in 2019 in Belgium aged 73! He also spent 5 years as Manager of the Belgium National Rugby 7s.

What did you like about Lambrook when you were here?

What I liked about Lambrook were the friends I made there, especially the ones with whom I got into a lot of mischief! Unfortunately, it didn’t do me much good. When my father asked the headmaster why I had not been nominated as a prefect for my last term in school, he was told that it was because I kept such bad company!

Obviously, all sports were a great relief from the time spent in class or doing homework. My best moment of the week was putting on my sports kit in the locker room in preparation for a match against a visiting team.

What sports did you play when you were at school?

I played football in the autumn term, rugby in the spring term and cricket in the summer term. I remember well the 9-hole golf course which introduced me to that excellent sport. A favourite challenge was on the 9th hole driving up towards the façade of Chapel and its Rose window. The trick was to try to hit the window in one shot, something which was beyond the reach of most of us! Fives was also a game I learned at Lambrook as was tennis. 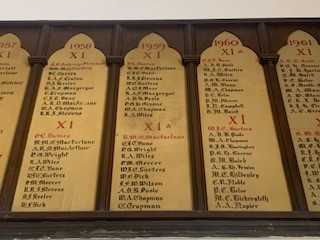 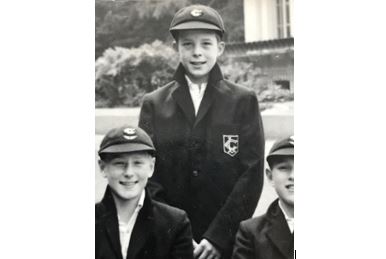 What is your happiest sporting memory at Lambrook?

An especially happy moment each year was Parents’ Day, when we would all gather around the cricket pitch and watch the afternoon’s game accompanied by a large basket of sandwiches and strawberries and cream.

Who were your school rivals at Lambrook?

Ludgrove School were always tough opposition on the Rugby pitch, and it was always a good feeling to beat Bagshot. Sunningdale gave us a good run for our money on the cricket pitch.

What was most inspirational about Rugby at Lambrook?

I started playing Rugby seriously at Lambrook when I was about 11. I was particularly attracted to the sport since I was a good head and shoulders taller than other boys of my age.

What position did you play when you were first introduced to the sport?

I started in the second row and later moved to No 8, my favourite position over the years.

What did you do after leaving school?

After Lambrook, I went to Charterhouse and then studied Agricultural Economics at Reading University. During a visit to Reading the Kenyan Minister of Agriculture recruited me to work for 5 years as Finance and Planning Officer in the newly independent government. I played a lot of rugby in Kenya, Tanzania and Uganda and toured Malawi, and Zambia with rugby teams. My last games in East Africa were with a Kenya rugby side which toured Texas in 1973. We played 7 matches and won them all, but I got knocked out a couple of times (there were no HIAs in those days so I use those events to excuse my occasional forgetfulness these days.) As a further distraction, I was Treasurer of the East African Rugby Football Union.

From there, I worked in Barbados, Honduras (Central America) where I learned Spanish, Tchad where I improved my French, Equatorial Guinea, Ivory Coast, Gambia, Liberia, Togo, Zaire (today Democratic Republic of Congo), Cameroun, Madagascar and Mauritius. I was employed by the World Bank, Washington DC. My work involved setting up national agricultural extension, research and training services for millions of small farmers. I found time to play rugby in Tchad, Ivory Coast, Togo, USA, Zaire, Madagascar and Cameroun and occasionally in England when I was home on leave.

It was the same fun sport whoever we were playing with or against, whether it was the Tchadian Army team or an Ivorian University team or the Railway Club in Madagascar. Sometimes we had to share a pitch with the odd herd of goats (Tchad) or an evangelical Christian meeting (Zaire). Everyone forgot very quickly who had won or lost after the game ended as we gathered around a few drinks at a local bar/café.

When I retired to Belgium with my wife in 2001, I contacted the local rugby club in Namur, the capital of the French speaking region of Belgium to ask if they accepted veterans. When the Secretary replied that they accepted anyone, I knew I was back in good company! I survived my first match age 53 and decided that I could carry on playing as long as my body did not complain too much. 20 years later, I played my penultimate game, leaving the door open for a last game someday, somewhere!

Were you involved in making 7’s an Olympic sport?

In 2010, the International Olympic Committee accepted Rugby 7s as a new Olympic sport. Many rugby-playing countries quickly scrambled to create and train national 7s teams to try to qualify for the 2016 Olympics in Rio de Janeiro. Belgium was no exception. We had an excellent French coach, who himself had played 15-aside and 7-aside rugby for France.

It nearly worked. After moving from 26th place in Europe in 2011, Belgium was to play against the top 12 Rugby 7s teams in Europe for the first round of qualifiers in 2014. In what seemed to be the pool of death on that June weekend in Lyon, France, Belgium faced up against England (Champion from the previous year), Scotland and Wales. Belgium beat all three and reached the quarter finals the following day, when they beat Georgia. Victory over Spain of 33-0 in the semi-finals was conclusive. It was like living a dream, especially since none of the players were professionals unlike many of their opponents. At 7-7 at half time in the final against France, the atmosphere was too stressful to imagine. France finally won the tournament. Two weeks later in Moscow the Belgian boys walloped the French 43-0. The excuse was that the French were not fielding their best team but for us, the French Goliath had been knocked down by the Belgian David.

Belgium did not qualify for the Olympics but World Rugby were so impressed by the spirit of the Belgians that they were invited to the famous Hong Kong 7s as the World Series invitation team for 2015. They met Olympic champions Fiji in the first round and many other of the top 16 world class teams. A dream come true! Of course, there was a lot of pride for one Old Lambrookian who had succeeded in getting funding together for the whole event where the Belgian Rugby Federation had been unable to produce a single penny in support of its national team (but that’s another story!). 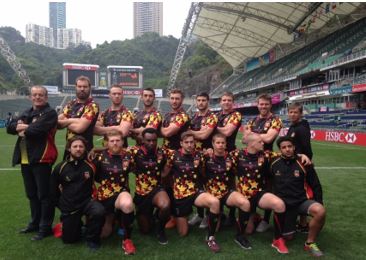 What has been your favourite game ever?

If by game you mean match, then finding myself still alive after 80 minutes of rugby at the age of 53, after my first match in Belgium (which thrilled me in spite of losing 70-3) after an absence of 13 years off the pitch.

If by favourite game, as in favourite match ever, then beating England at Lyon, France in June 2014, as manager of the Belgium Rugby 7s team

If by game as in sport, then obviously the answer begins with a captial “R”! 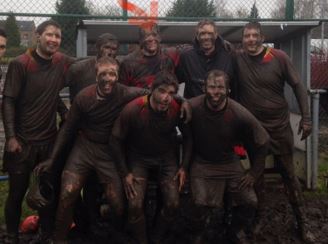 Are you interested in other sports, or is all your focus on rugby?

Today, I spend a fair amount of time (too much according to my wife!) playing golf. Lambrook gave me a good start in this sport too but I am still trying to reach my schoolboy handicap.

How have you kept fit for all these years?

Jogging has always been my greatest source of keeping fit. I loathed cross country runs at Lambrook though! 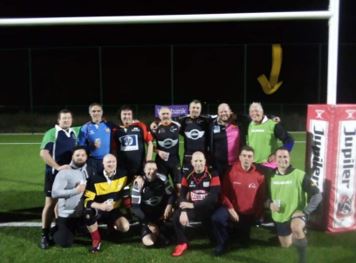 Posing before the “penultimate” match 2020