It has been a wonderful start to the cricket season this week, with pupils enjoying their training in their lessons and taking part in competitive fixtures against the Oratory on Saturday, Highfield on Wednesday and Danes Hill today. 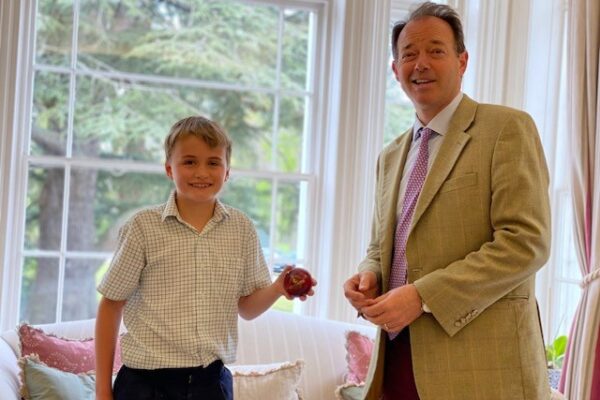 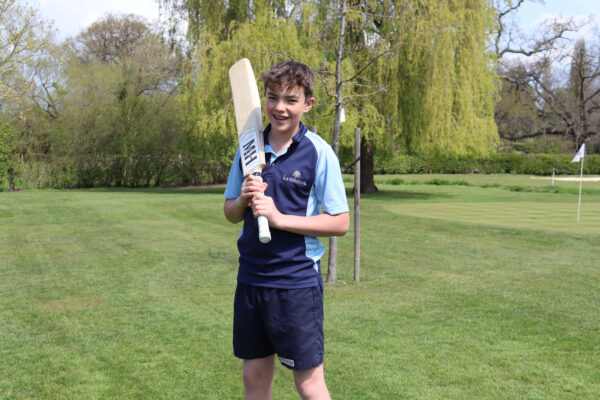 Arthur scored a half-century on Saturday

Despite not playing cricket last year at Lambrook, the children have thrown themselves into the game and have impressed all with their attitude and aptitude towards the most iconic of sports.

Players of the Week go to Harry in Year 5 for his impressive performance Vs Highfield on Wednesday and Arthur in Year 8 for his 52 Vs Oratory for the U13 B’s on Saturday. Further highlights include wins on Saturday for almost all of the teams, Alexander’s excellent wicket keeping for the Colts B’s, a great catch from Finn S in the Under 10 B’s and our U13 girls enjoying the challenge of hard ball cricket.

Here are a few highlights from the match reports from the last three games and 39 fixtures!

On Saturday our Middle and Upper School Teams enjoyed perfect cricket conditions, the sun shone, the team buses gleamed and caps donned, our Boys’ teams excitedly took to the fields at Lambrook and the Oratory for their first cricket fixtures in almost 2 years… 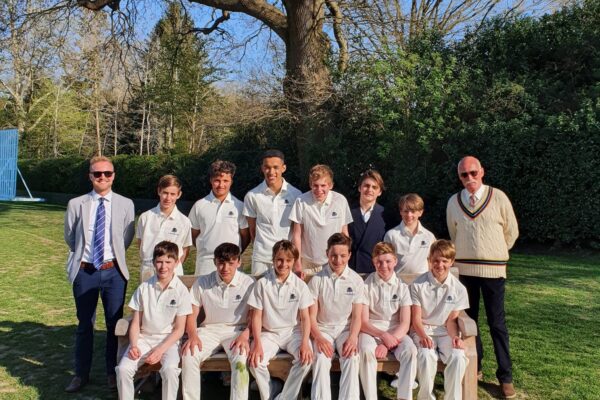 U13 A’s friendly “A steady team performance to open the longest awaited season in living memory saw Lambrook’s top side record a comfortable victory. 8 of the boys bowled very tidy spells with Heath and Ben taking two apiece… Jake and Rory made a solid start to our run chase with Rory playing two sumptuous extra cover drives to click us into gear… ”

U13 B’s won “…Oliver came in and put together a well played 29, sharing a great 58 partnership with Arthur. A quick fire 12 from Noah and 8 from Seb put the home team in a commanding position. A lovely 23 off 16 balls by Otis at the end of the innings was exciting to watch but the stand out performer was Arthur with a glorious 51….”

U12 C’s won “….Key performers in the first innings were Barney, who took two catches, Elijah who took three wickets in his two overs and Algy who took two. Joshua also had a fine bowling performance ….and the team looked like they had had far more than just a couple of training sessions…”

U11 A’s lost ” …Stand-out bowling performances go to Dylan, Guy, Henry and Jake and Ludo’s mighty arm from the boundary was an impressive sight to see at Colts level!…”

U11 B’s won ” Finn M had two fantastic overs and deserved getting a wicket. Ted D and Vincent LW both impressed with the ball too. Alex SM had a brilliant day behind the stumps, rarely letting a ball get past him and taking a good catch. Most encouragingly of all – the boys were very eager, supportive and proactive as fielders – leading to us not leaking many runs.”

U10 B’s won “… Lambrook made a strong start, with some excellent line and length from Jacob, William and Oliver in the opening three overs restricting Oratory’s opening pair to only a few runs, backed up by some excellent pressure in the field.  As Oratory’s innings progressed, runs began to flow, wickets fell – including a terrific catch from Finn – and their 18 overs ended with the score on 266 (having started on 200 for this format!)…”

The weather conditions were very different by Wednesday, but this didn’t dampen any of the players’ enthusiasm, with the Girls eager to play their first fixtures of the season. 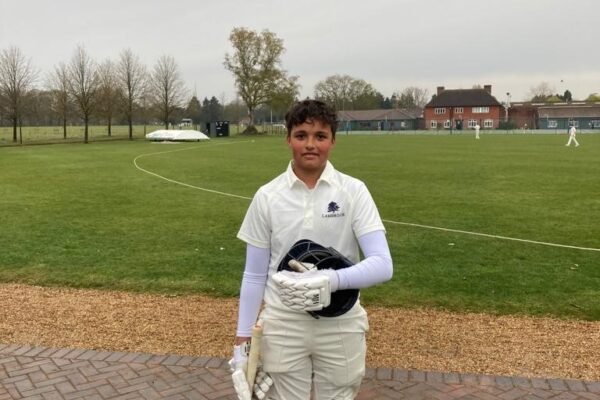 Jacob P top scored in the 13A’s win against Highfield

Girls U13 A’s won “From the first ball bowled by Bish I knew we were going to be brilliant today. The scoresheet is littered with dot balls which shows how accurate our bowling is! Wickets began to fall in the fifth over with Jemima taking 3 wickets in her over…”

Girls U12 A’s won “…Amelia and Alexandra both took a wicket each with terrific deliveries. Frankie took a screamer of a catch which must have stung her hands in the cold condition but you would never have known. Ciara bowled a very good line and length…”

Boys U11 C’s won “It was lovely to see Conrad celebrate his first Lambrook cricket appearance against an opposition which was topped off by with a fantastic catch acting as our wicket keeper. Other highlights of the match include some pin point bowling from Stirling where he was rewarded with 2 wickets, one with the bails flying off and another with a superb catch from Kit in the field.”

Girls U10 A’s won  “Our fielding was impressive, showing excellent teamwork and limiting our opposition to scoring only one boundary the whole innings. Our bowling followed suit with all girls performing accurate and consistent bowls…A really fantastic first match with a well-deserved result! Well done girls!”

Girls U10 B draw  “In truly awful conditions the Year 5 Girls played a fantastic game of cricket against a very evenly matched Highfield.  …we also took some fantastic catches and created a few run outs. Overall this was a great first game for the girls and great start to the season.”

Boys U10A lost “The constant rain and bitter wind did not deter the boys from showing great enthusiasm for the first hard ball match of the term and indeed for some, their first hard ball match ever!” In the end Highfield were able to get past our score despite a outstanding final over from Harry which included a hat-trick of clean bowled wickets. His finished with figures of 6-11 from 3 overs, a super effort.”

This afternoon’s friendly games were a great introduction to pairs cricket for the U8 Girls. There was some brilliant bowling and batting showing a promising start to the season. 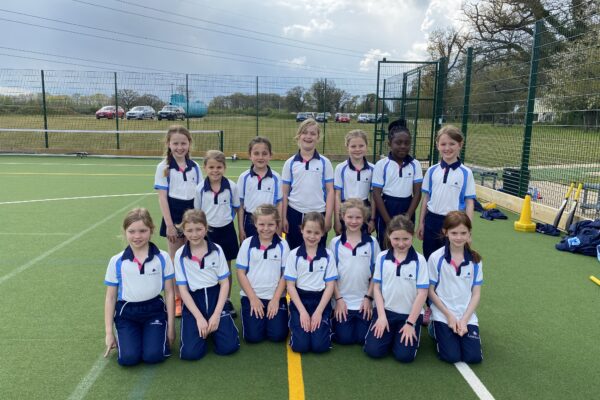 U8 A Girls v Daneshill 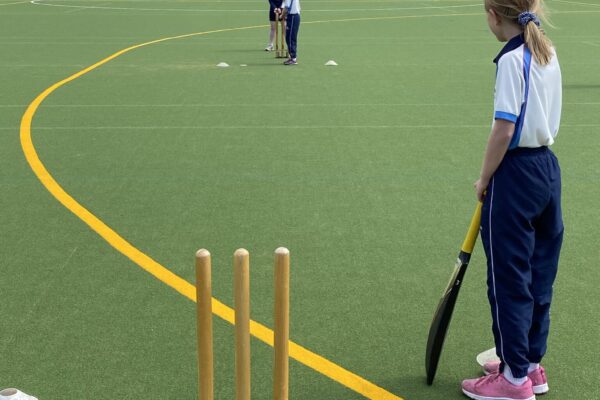 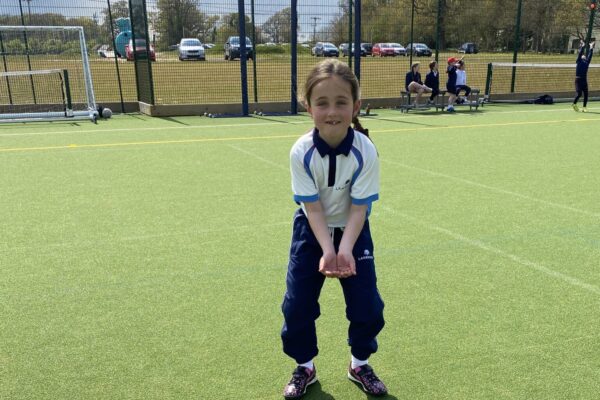