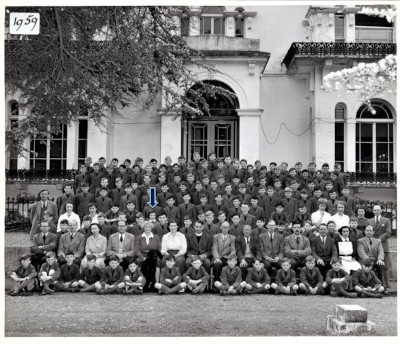 At our most recent Alumni event in January, we were fortunate to have the company of Alison Browne, daughter of a former Lambrook Headmaster and the first female pupil at the school. Alison has kindly shared with us her experiences of this time in her educational journey:

Towards the latter half of the 1950s, this little girl was thrown into the mix of 100 schoolboys, inkwells, oak desks, chalk, Latin grammar & schoolmasters. This almost eight-year-old knew already about Lambrook, the grounds, the school food (roly poly pudding, dead man’s arm etc) and every room upstairs and downstairs, as she lived there. The contemporary thinking suggested that a headmaster could send his daughter to such a school (as she was an exception anyway, being Headmaster’s Daughter) but not send his son. Contemporary thinking also indicated that the academic education offered by boys’ (boarding) prep schools was considerably better than that offered by the girls’ schools.

The teaching staff (aka ‘Masters’) were all men; one or two had been overheard to express some genuine concern about “having a girl in the school”. But her savvy and far-sighted mother (Isla) ensured her daughter was up to speed with some basic Latin grammar declensions and Maths times tables before starting school there, so relevant staff were won over within the first week or two.

What did a typical day involve?

After Chapel (5-10 min), breakfast, often porridge and sometimes cooked bacon & fried bread one day, tinned tomato and fried bread another, fried egg & fried bread and even more fried bread), it was PT (Physical Training) outside. 10-15 minutes of exercises, jumps, stretches and marching. Then down to lessons; each morning there were three 40-minute lessons (with staff moving classrooms), then half an hour’s break (when the boys went outside and often kicked a football around), then a further two lessons before lunch; and lunch (again, no choices – everyone ate the same).

What was it like being with all the boys?

In lessons, there was always plenty to think about – with staff (all secretly given nicknames) who were prepared to challenge and develop our thinking, and if we were lucky, to pursue a red herring when an adroit question had been posed. In class, I was on an equal footing with the boys, also doing PT and gym with them.

Things divided at games time; for the boys it was cricket, football and ‘rugger’ (rugby), with weekly scouts, gardening – plus golf or the rifle range for some! Meanwhile I had a pony to be groomed or exercised (and I must have bored them silly on the subject) and joined a Brownie pack for some feminine input! During the big freeze of 1963, I skated with the boys on the local pond; when an ice hockey match was arranged against a local school, their Headmaster was asked if they would mind Lambrook fielding their secret weapon – a girl.  So I made it into the Lambrook ice hockey team; on seeing us in matching woolly hats, the opposition decided that another of the team members, a boy whose fair curls had escaped his hat, was The Girl and ensured he had a most difficult time on the ice!

What subjects did we learn and did you ever feel the subjects were too ‘boy-focused’?

As intrigued as the rest of the class, I copied down the recipe for gunpowder and noted the naval tactics employed to ensure the English success in the Battle of Trafalgar, whilst in another lesson we were tackling the long multiplication of money in a pre-decimalised world. I wasn’t the only one to find the Punic Wars in Latin interminable and learned lines of English poetry with the rest of them. French conversation was doable, ditto the creative writing (just one prep – an essay on a ‘spy ring’ – fazed this girl!).

What did you do in your free time?

I had the option to hang out in the classroom, over the years growing closer to the smaller group I went up the school with (but always the whole group, as I was mortified if anyone suggested I had one particular friend – acute embarrassment!). Learning to sword fight with a 12” (30 cm) ruler stood me in good stead when I took fencing lessons for real later on.  But the best fun was preparing the room for pranks on All Fools Day, designing random pulleys for something to drop as the door opened, placing improbable items in the desk drawer or ensuring the chalk was unusable.

Did you enjoy your time at Lambrook?

I thoroughly enjoyed my time at Lambrook; it was a world of more limited choices and yet for me tremendous amounts of freedom. I accessed every part of the school, knew every tree in the grounds, the teaching staff and their families; all the catering and support staff and I knew a great deal more about the behind-scenes than any of the boys. And my family were close by. Above all, it was my home. What’s not to like?!

But I was always the Headmaster’s Daughter; seeing both sides and a foot in each camp.  One heard many things that it would not do to pass on and I quickly learned to keep my mouth shut – and leave it that way! Once in a while (eg at a breaktime) if my parents were busy and a visitor arrived early, I might be enlisted to show someone round (as well as having to handle their curiosity about being the only girl in the school).

Looking back, what did you learn from this experience?

Was this ‘experiment’ successful? Others must judge and I’d be interested to know what criteria they might choose. Walking into one of the top girls’ schools with the top scholarship was undoubtedly a credit to Lambrook’s academic teaching. In light of my experience, I consider it unhelpful to talk of an academic curriculum which is gender-based.  For ‘education’ is far wider than just the academic side. Co-education is a subject that will continue to be regularly debated, but I would hazard a potentially controversial guess that single-sex education may, in some form, rear its head again within the next 100 years.

The years at Lambrook gave me a deep understanding that people are people – and the commonality between boys and girls is vastly greater than any differences. An abiding gift from those Lambrook years has been an ability to make real friends with men throughout my life. 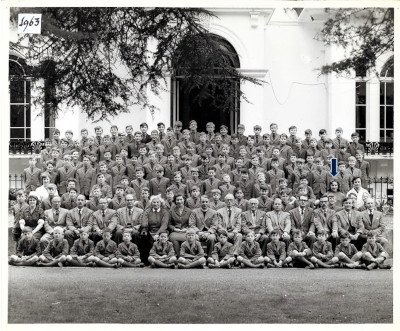 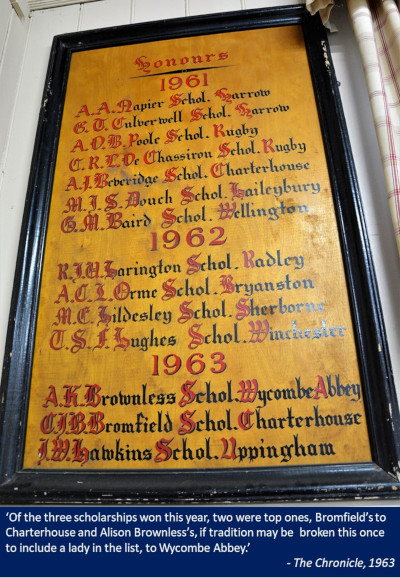