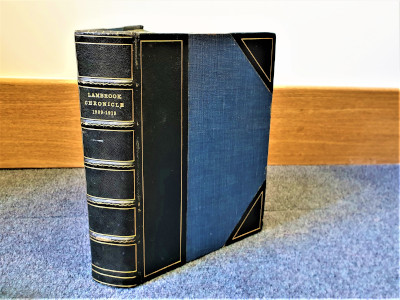 Towards the end of last term, we received a rather wonderful and unexpected email from a gentleman in Sheffield, who had just rediscovered a leather-bound copy of the first eleven Lambrook Chronicles (from 1909 to 1919), which he vaguely recollected having bought from a book stall many years ago.

Since he had no prior connection to Lambrook and was having a bit of a domestic sort out, he kindly offered to send us the volume for our school records. We gratefully accepted his generous gift, of course, and you can see the handsome new addition to our historical archive pictured above. 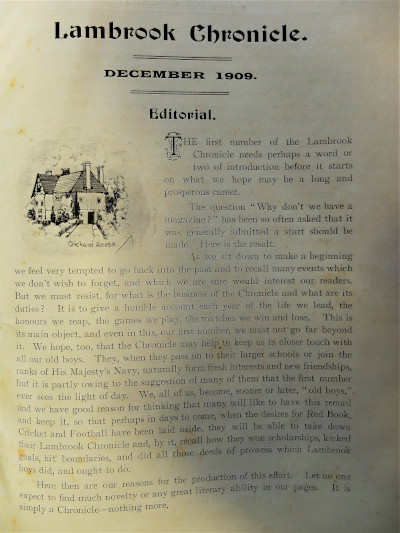 The inaugural edition of our school magazine was launched in December 1909 by the Headmaster, Reverend F. D. Browne, with the following words:

‘The first number of the Lambrook Chronicle needs perhaps a word or two of introduction before it starts on what we hope may be a long and prosperous career. The question “Why don’t we have a magazine?” has been so often asked that it was generally admitted a start should be made.

What is the business of the Chronicle and what are its duties? It is to give a humble account each year of the life we lead, the honours we reap, the games we play, the matches we win and lose. This is its main object, let no one expect to find much novelty or any great literary ability in our pages. It is simply a Chronicle – nothing more.’ 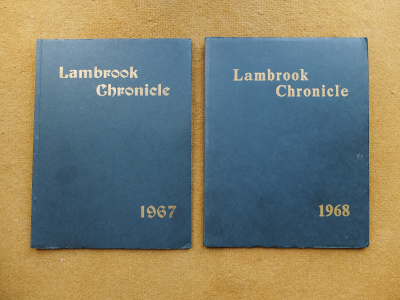 The front of that inaugural edition consisted of dark green card with gold lettering in the distinctive ‘Becker’ font and the same design was maintained for over fifty years until a more conventional serif style replaced the original font in 1968.

It is interesting to note that the redesign happened to coincide with the end of Lambrook’s first year as a charitable trust, perhaps providing a visual signal of the fact that the school was moving with the times into a more modern era. 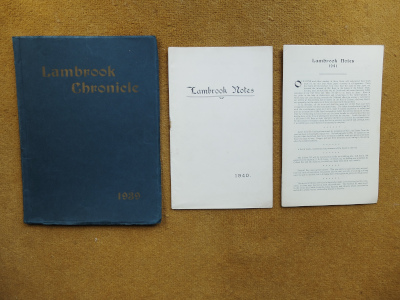 Only during the Second World War and the immediate post-war period was a change forced upon the printers, owing to the rigours of rationing. The quality of paper was much lower and both the size and number of pages had to be reduced, resulting in the 66 pages of the 1939 issue being slashed to 20 in 1940 and only six in 1941.

Having been entrusted ever since 1909 to John Drew Ltd of Aldershot, the Lambrook Chronicle was produced more locally in 1940 by the Ascot Printing Works, which helps to explain the title’s sudden departure from its familiar cover design. 1941, however, saw a return to its former stable and the restoration of the original font.

As if somewhat embarrassed by its diminishment, the school magazine also altered its name for those two years to Lambrook Notes and the editor felt obliged to issue apologies to his readers:

‘It is indeed sad that the Lambrook Chronicle cannot be published this year in its usual form. Instead it is hoped that Old Boys and friends of the School will accept these brief notes in its place,’ (1940).

‘Old Boys and other readers of these Notes will understand that much must be cut this year when paper economy is all-important,’ (1941). 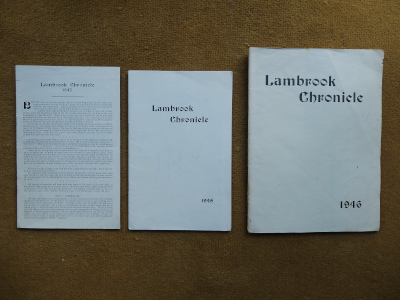 ‘Brevity must be the keynote this year in the recording of the School’s news,’ (1942).

‘If paper were not so scarce, many pages could be written on the doings of Old Boys in all parts of the world, (1943).

‘It is again necessary to produce the Chronicle in its shortened war-time form, but although many details of School news must be omitted, it is hoped that items of interest for the majority of readers will still be found,’ (1944).

Following the cessation of hostilities in 1945, however, first the cover style and then the size of the magazine returned to their pre-war settings, with the dark green card and gold lettering finally reappearing in 1952 in time for the Coronation of Queen Elizabeth II during the following year. 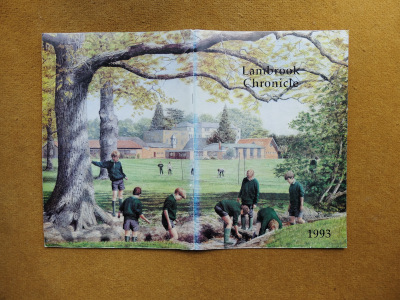 In more recent times the Lambrook Chronicle has continued to develop, with black and white photographs being introduced in 1971 when Tom Clough succeeded the Rev. Philip Brownless as Headmaster, colour pictures arriving in 1991 during Mike Bickersteth’s tenure, and the traditional dark green and gold cover eventually being replaced by a full-colour image in 1993 upon Robin Badham-Thornhill’s appointment.

Following the merger with Lambrook Haileybury School in 1997, the title Lambrook Chronicle was dropped entirely, only to be reinstated after the school had formally withdrawn from the arrangement with Haileybury in 2009.

Experimentation has seen the appearance of a landscape format edition, as well as a double-year publication and, since the Michaelmas Term of 2016, the magazine has been produced biannually in order to document the highlights of life at Lambrook. The latest issue is currently being distributed. 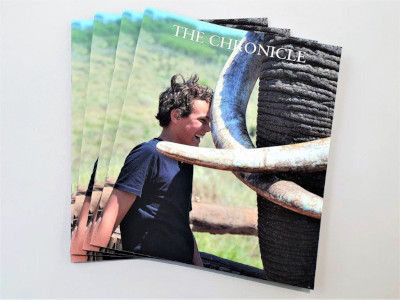