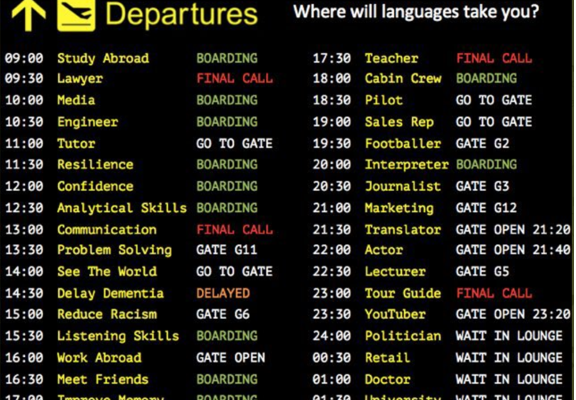 “The decision to learn a foreign language is to me an act of friendship. It is indeed a holding out of the hand. It’s not just a route to negotiation. It’s also to get to know you better, to draw closer to you and your culture, your social manners and your way of thinking.” The words of John Le Carré, the celebrated author who passed away this week, show just how powerful language learning can be. In an article outlining why we should learn German, he highlights the importance of learning and teaching foreign languages as a way to get to know other cultures and understand other ways of life. I have always been fascinated by the way languages reflect different perceptions of the world: there are close to fifty different words for snow in the Inuit language, for instance, to reflect its importance in their society. Closer to home, there is no real translation of ‘cosy’ in French but also no proper word for ‘gourmand’ in English, providing a glimpse of what is important to these two nations.

Learning a language is not easy and progress is not always linear so it can at times be disheartening. But when we hear tourists speaking in that language and understand what they are saying or when we are able to conduct a simple transaction or an entire conversation, however riddled with mistakes it might be, it all becomes worth it and the feeling of satisfaction is immense. The skills involved in language learning are ones that open many doors: team work, analytical and negotiating skills and problem solving strategies, to name but a few. All these are sought after by employers in many fields. As an added bonus, learning a language also improves your memory and can be taken up at any age, with proven benefits in warding off dementia.

The children we teach today at Lambrook are likely to go on to take up jobs that have not yet been invented. However, there is no doubt that knowing another language is and will remain a useful tool on anyone’s belt. MFL teachers can still spot a Google translated homework a mile off, indicating that there remains a need for human touch in language learning. There is no saying where the journey that starts in the pre-prep will take our pupils. It may be a school exchange trip and long-lasting friendships, a GCSE grade, some memorable holidays abroad, a university degree or the key to a career. For me, certainly, language learning was truly life-changing, leading to two fabulous years abroad, to teaching in institutions such as the Sorbonne, Cambridge University and Eton College (and now Lambrook!) and to forming a bilingual family. As MFL teachers, we certainly hope that this is just the start, that our pupils will keep up with French or go on to learn other languages at some point in their lives, that we have kindled a flame which will never quite go out.

Learning another language is much more than just poring over long vocabulary lists and understanding verb conjugations, though these are necessary steps which also often shed light on the workings of our own native language, the one we don’t normally have to think about. Language learning is, particularly for young children, realising that not everyone speaks the same language, which is not a given if one is never exposed to other idioms. I once taught a class of young children, some of whom genuinely thought other languages were just made up funny noises! This understanding is developed naturally during the process of learning a new language and becomes our ability to communicate with people outside of our own culture. To make the effort to learn at least one language other than one’s own is a labour of love and with it comes tolerance, understanding and empathy, qualities which the world will always need.